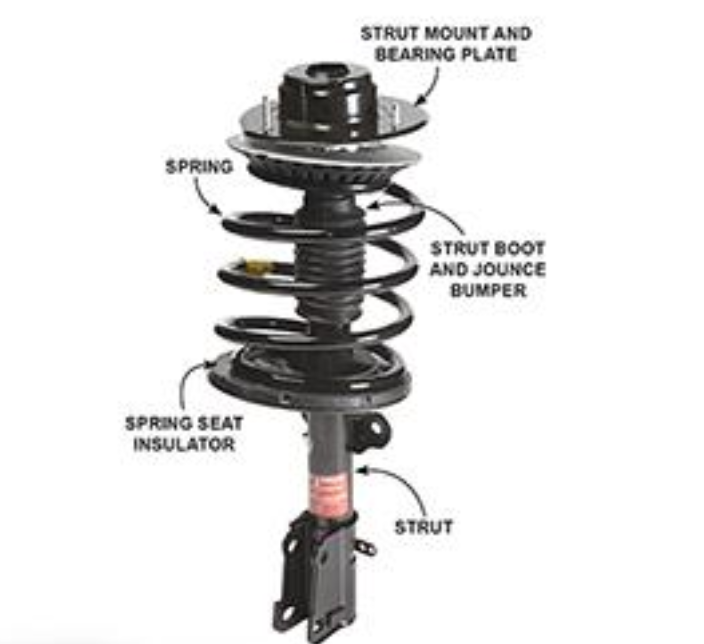 If you’ve put 80,000 or more miles on your struts, they’re worn out and must be replaced. We know they’re expensive (about $700 for front struts replaced at a shop). But in the long run, driving on worn struts actually costs you more.

Driving on worn struts actually costs you more because the unchecked bouncing destroys your tires and quickly wears out other expensive suspension components like ball joints, control arm bushings, stabilizer bar end links and tie rod ends. And worn struts are dangerous because they increase your stopping distance by almost 10 ft. from 60 mph and cause steering instability, especially on curves at higher speeds.

When you replace struts you should do it in pairs. The front struts carry the weight of the driver. The rear struts do not carry as much weight

The old ‘bounce test’ for testing shock absorbers doesn’t apply to struts-a severely worn strut will pass that test with flying colors. Instead you have to rely on physical inspection and a road test. Replace your struts if you notice any of these issues:

If vehicle tires are free to bounce (which is what happens when struts and shocks wear) they are not as effective at gripping the road, so steering, handling, and braking are all affected. Shocks and struts are not just for ride comfort: their primary function, tire control, is a much more important role.

Symptoms of bad shocks or struts include: Badly cupped tires and/or noticeable tire shaking, wheel shimmy or vibration after hitting a bump. Suspension bottoming on rough roads or when backing out of a driveway. A bouncy ride.

The two components of a loaded front strut – the coil spring and the shock absorber – are mounted together in an assembly that is connected to the vehicle’s steering knuckle. The steering knuckle is attached to the steering system by way of the tie rod so that the front wheels can be turned. The top of the strut assembly bolts to the vehicle body in the strut tower, where it is able to pivot when the steering wheel is turned. The bottom is connected (by way of the steering knuckle) to the lower control arm and wheel hub. The strut assembly allows the vehicle suspension to rotate while it absorbs impact from rough terrain, helps maintain contact between the tires and the ground, and offers a smoother ride for passengers.

Most front-wheel-drive cars feature struts at the front wheels for efficiency in packaging, with shock absorbers at the rear. Rear-drive vehicles, on the other hand, usually feature different suspension designs with shocks at all four wheels